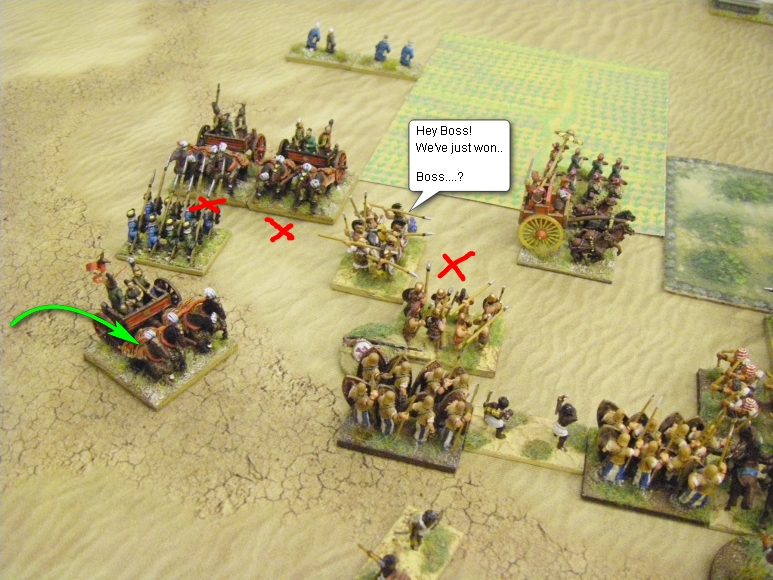 As predicted, the Warring States managed to find more than enough spare troops to totally eliminate the Kyreneans and their leader, but at the same time the Egyptians also managed to finally, finally wipe out the last resilient survivors of the Chinese Ambush.

This left the centre-right segment of the table in some disarray, with not a single unit in combat at the end of the turn. Perhaps it was time for an early Christmas truce, and a bit of trench football perhaps? 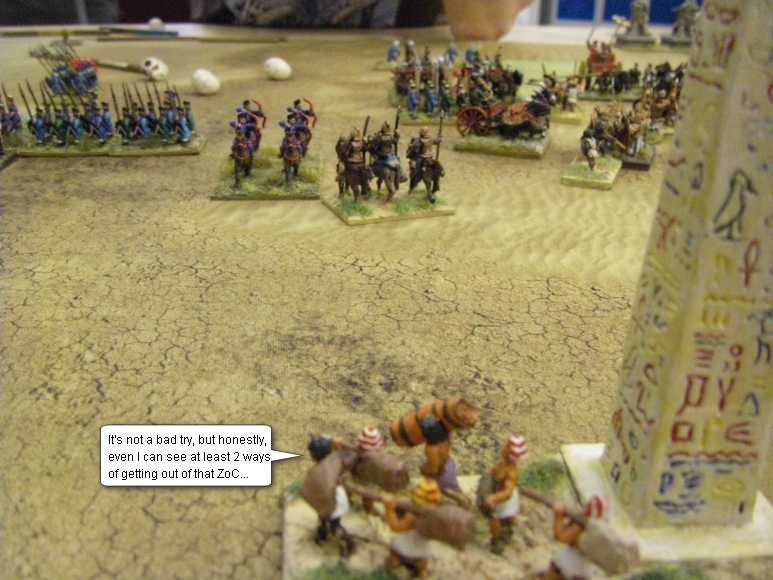 The Warring States army was looking for easy ways to push the Egyptians over the surprisingly close finish line of 30 total unit casualties, and an easy unopposed run to the baggage from a couple of light horse archers looked very much top of the wonton-eaters shopping list.

Embarrassingly the only thing left to hand for the Egyptian commander was some of the backstop Mediocre Cavalry, who were pressed into ZoCCing service to pin the enemy archers and seek to delay the inevitable by a few moments more. 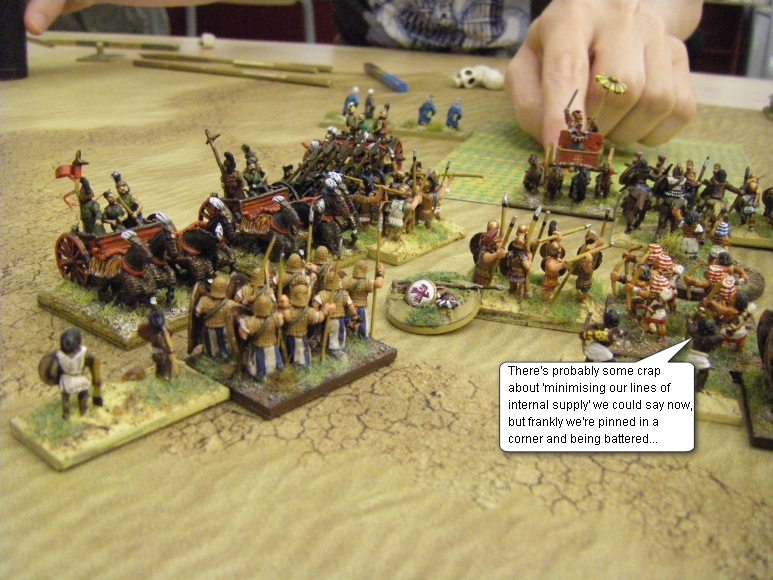 With the Chariots Triumphant (Was that an old FoG list book?) and now free to roam at will, the Egyptian army was forced into assembling a hastily cobbled together Kampfgruppe-style assemblage of random units to shore up the fast-crumbling Great Wall of Cairo.

Sadly the equipment lying to hand was mostly of the Mediocre Spearmen category, with barely a Jagdpanther or KoenigTiger in sight - much to the glee and amusement of the happy Chinese Charioteers. 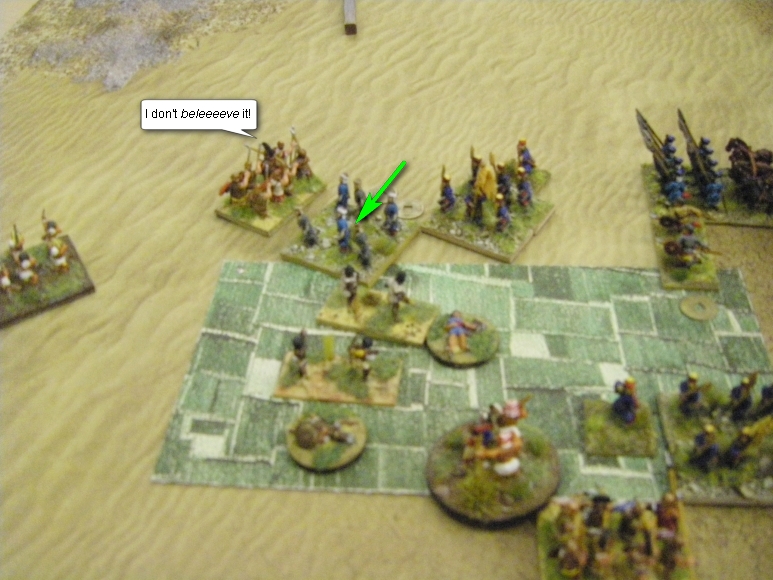 As many of the men fell under the baleful influence of the Sphinx's almost-a-laxative tea-towel headdress, the Egyptian army were now teetering on the brink and the number of places they might finally succumb were legion.

Appropriately however, it was the turn of China's Mediocre Crossbowmen, out on the Chinese right flank which the Egyptians had targeted as a weak spot and aimed for their own victory, who did the final deed.

The impressed and impressive peasants dug deep and pulled out a stunning win against the Elite Guard Archers (with 2 hits down already no less) to tip the North African Desert Dwellers to ultimate defeat.

The Result is a loss for the Egyptians, with only 17 out of 24 of the Warring States break points down, for more than 30 of the Egyptians.

Click here for the report of the next game in this competition, or read on for the post match summaries from the Generals involved, as well as another episode of legendary expert analysis from Hannibal

What nonsense! I refuse to accept this result, or my part in it, or indeed the involvement of my troops, or my army list selection or even my choice of terrain pieces.

More importantly still, the dastardly use of a clever selection of high quality troops attacking in a measured way on a relatively narrow frontage, and making full use of rough terrain which totally negates any combat abilities that my army, was most unfair and against the spirit of me being the biggest and most winningest genius in the combined histories of both Greece and Egypt.

Quite how one should react to such a set of reverses is hard to fathom, manily as it has rarely ever happened to me before in my untrammelled record of total continuous victory

I could perhaps try and see if there is anything to learn from this defeat, but probably better just to walk away and work out how best to set up my own competition circuit where only my brilliant tactics are allowed to win.

You hapless son of a big bag of adultery, what a comeuppance you were served here today by this veritable rotating buffet of top quality Chinese warriors - and how richly you deserved it as well.

Tozz Feek! This was not just a complete and utter repudiation of your lazy and one-dimensional army choice and monocular tactical lens, it was also a shamefully arrogant half-hearted unthinking defeat for which blame rests totally at your door. The matchups may not have been great for you, but they were pretty much the same as the previous game against the Romans and there you did try something better than lining up parallel to the rear edge of the table and advancing to defeat.

Advancing to the edge of terrain which you were incapable of entering with almost any of your troops is a totally different kettle of fish compared with your genteel yet effective wheel in the game against Dave from The Podcast, so your lack of memory from a game that ended only hours ago is staggering.

You have now demonstrated that your unbeatable army and genius tactics are indeed extremely beatable and about as far from genius as it is possible to be. Today, it was as if you came from behind a cow - perhaps this afternoon will see you showered with yet more shit in the next game. Allah Yakhthek!