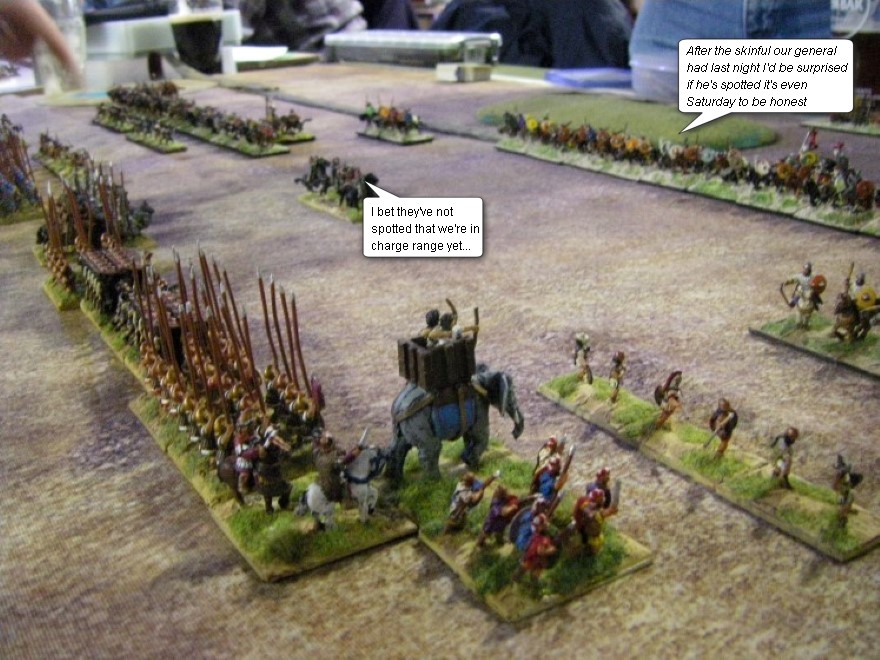 
The African Vandals had, perhaps surprisingly, or perhaps due to lack of sufficient dismounts, fear of the 4 Cataphracts, or even a misunderstanding about whether the riders might have to carry the horses should they choose to fight on foot due to the lack of dismount horseholder bases in ADLG compared to previous DBx-derived sets, had also declined to dismount any of their cavalry.

This meant that as the Seleucids steamed forward in a series of parallel lines the mounted African Vandals simply sat and waited, feeding their horses and watering themselves copiously with Doom Bar and other historic African Vandal libations. 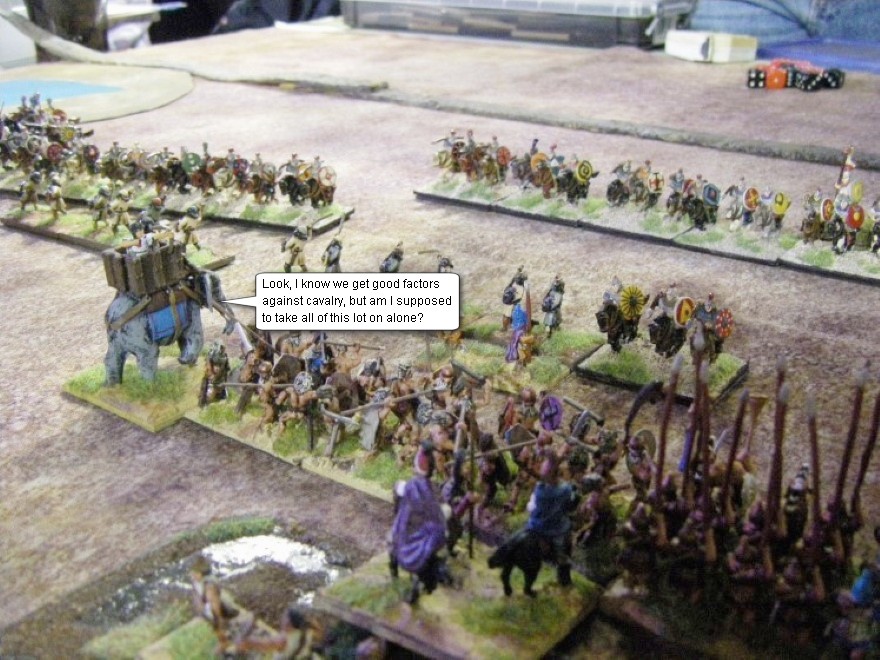 Soon the two lines of troops were getting closer to one another - especially on the left end of the main Seleucid line where yet again the fanatic and de-robed Galatians were eager for trouser-looting opportunities against the famously striped-trouser-wearing African Vandal warriors. Both sides fenced delicately, with the Successor Mediocre elephant provising a potent yet fundamentally flawed shield for the end of their line which the horse-borne African Vandals were reluctant to approach too closely. 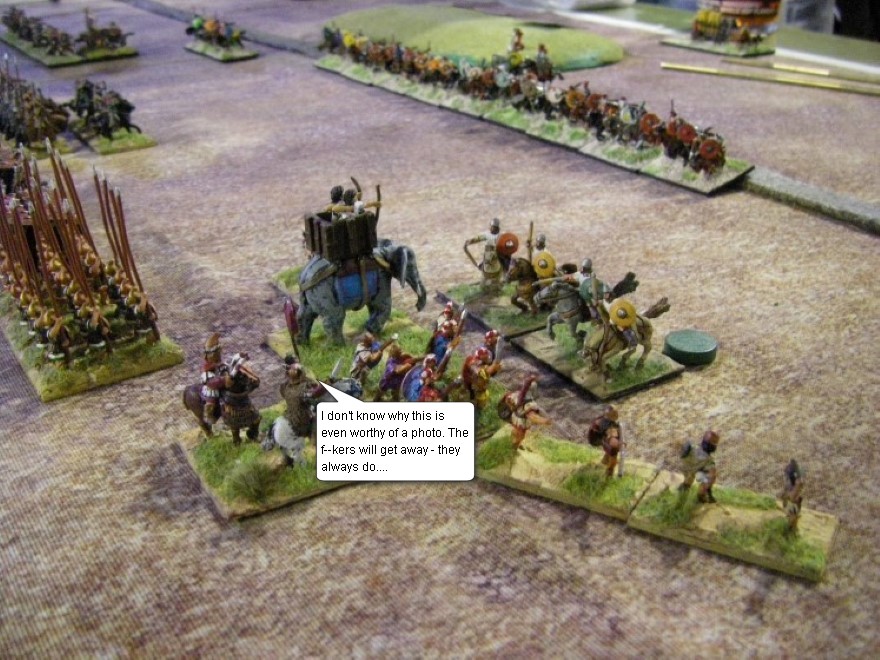 On the opposite flank, seemingly already committed to a strategy of engaging the enemy before the flank march turned up, the Successors were racing forward with their other crappy Elephant, pushing away the African Vandals screen of light horsemen whilst also cursing the idiot designer of this list for failing to include at least one unit of bowmen in each of the big infantry commands for exactly situations such as these.

Quite where the two Mediocre camel bowmen were at this point in time who knows, as they'd have been really useful right here right now as well 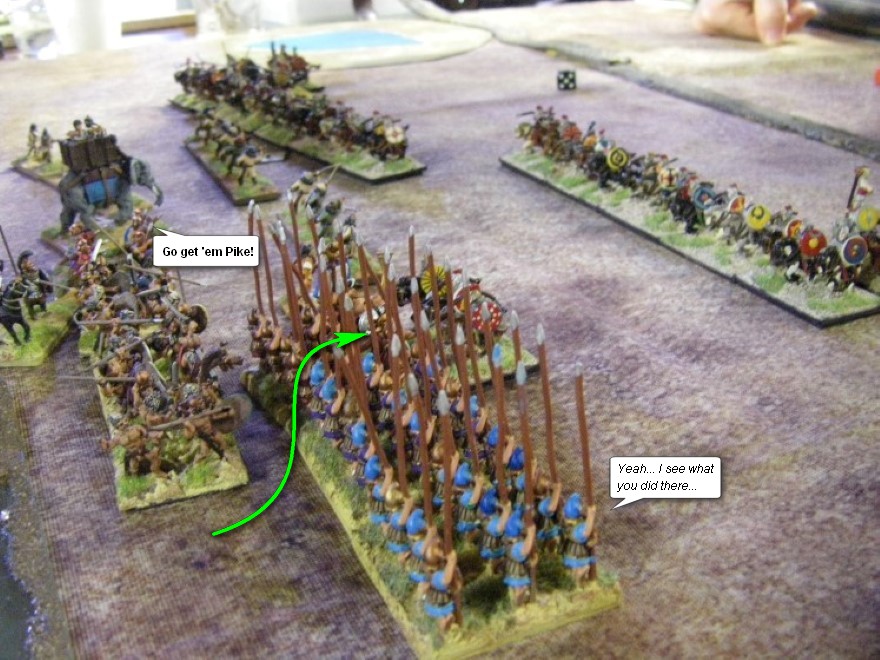 The Galatians, lacking as they did in trousers and other garments, had no pockets in which to keep a folded copy of the QR sheet for ADLG, but fortunately for them the crew of the elephant had not only a QR sheet, but also a complete set of the rules in a special compartment built into their howdah.

Quickly flicking through the relevant sections the bow-armed (but non-shooting in ADLG) howdah crew spotted that Pikemen were far better against Impetuous enemy Cavalry than the Galatians, and shouted out a warning.

The Galatians, chastened, held back as the Phalanx moved up and slid gently in front of them to confont the African Vanda lmounted horde. 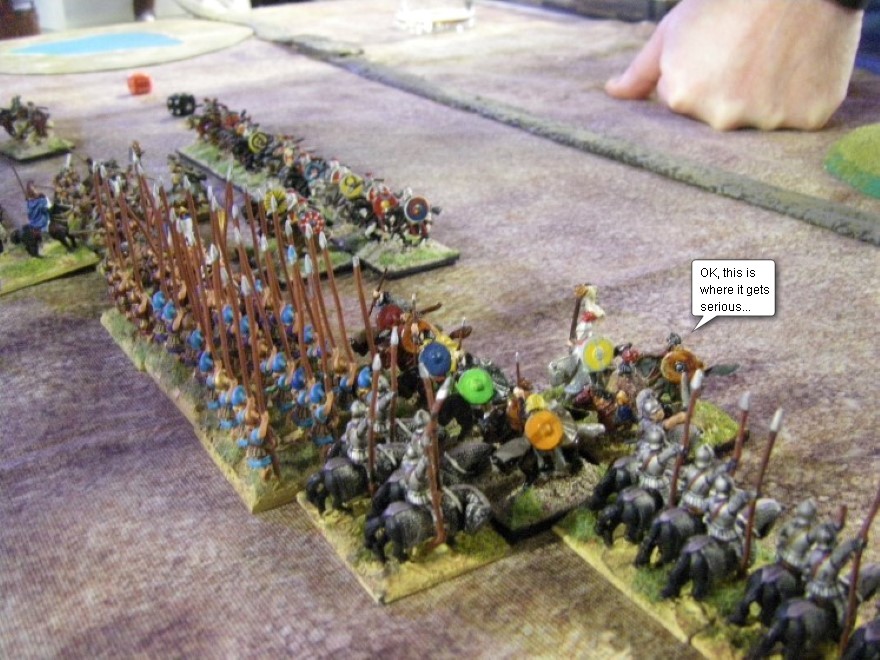 Combining with the Cataphracts, the Phalanx inched forward and caught the African Vandals in some disarray as they attempted to execute some sort of overly-complex counter-march type reshuffle of formation.

Or something else, maybe. It might have been the beer.

L'Art de la Guerre hint - Impetuous Cavalry are not forced to charge Steady Heavy Foot - but Cataphracts, and indeed other cavalry in range do trigger a forced charge. 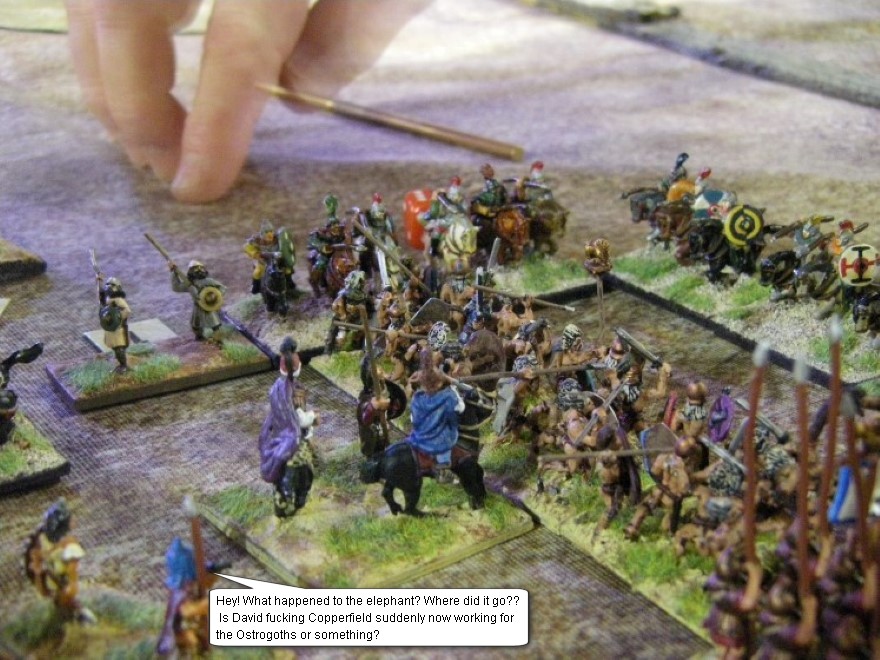 With the Crappy Elephant seemingly AWOL in the same place as those two Mediocre camels on the opposite flank, the African Vandals found themselves with a chance to slam into the end of the line of Galatians - which they grabbed eagerly with both hands, before recoiling in horror after realising exactly what the Galatians had on display to offer anyone looking to grab at them with both hands.

(These are "affiliate links". If you buy something after clicking on them I get a small kickback from Amazon) 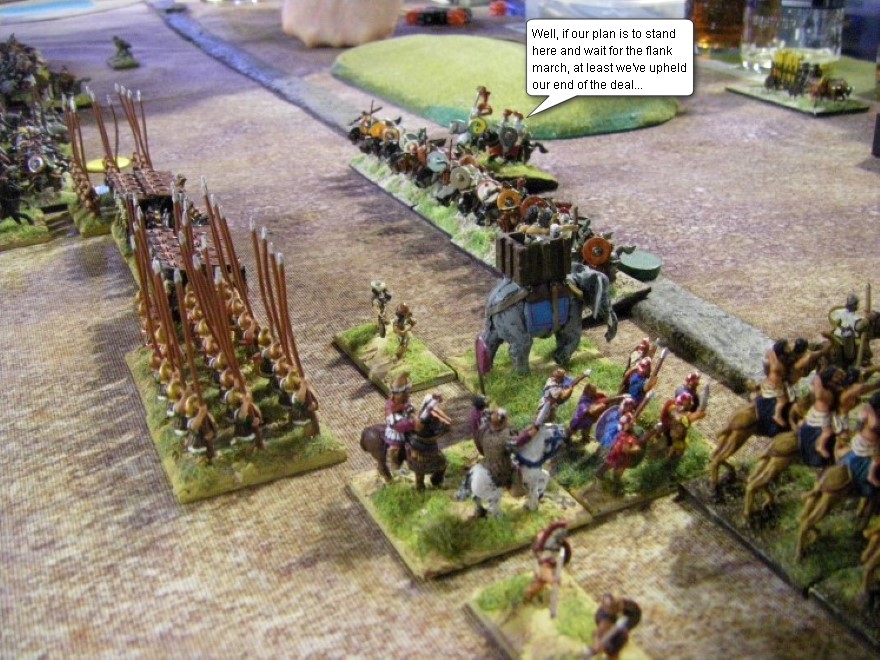 On the opposite flank the Mediocre Camel Bowmen had mysteriously reappeared (possibly after the first really decent command and control pip roll now I think about it), and were now combining as planned with the Elephant and skirmish screen in a rather crappy quality yet frightening to LH steamroller, pushing the African Vandal left wing back inexorably towards their horsemen who sat, befuddled in a miasma of real ale fumes which totally obscured their view of the onrushing wall of Seleukid forces. 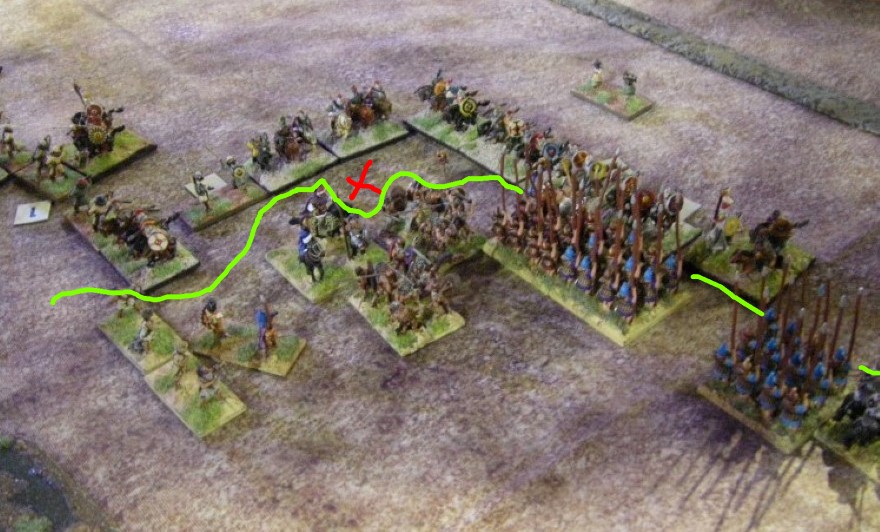 By now the Galatians had finally accepted that their protective elephant mush have been cut down by sustained enemy skirmisher shooting and that now they were entirely on their own and tasked with protecting the flank of the Phalanx - a job the slow-moving and unmaneuverable blocks of barbarian infantry were singularly ill equipped to undertake.

The Smurf-hatted Pikemen also realised how out of their depth their newly-minted flank protectors were, and rushed forward to try and get engaged with the African Vandal horsemen before they got rolled up in the debris of the likely demise of the Galatians to their left. 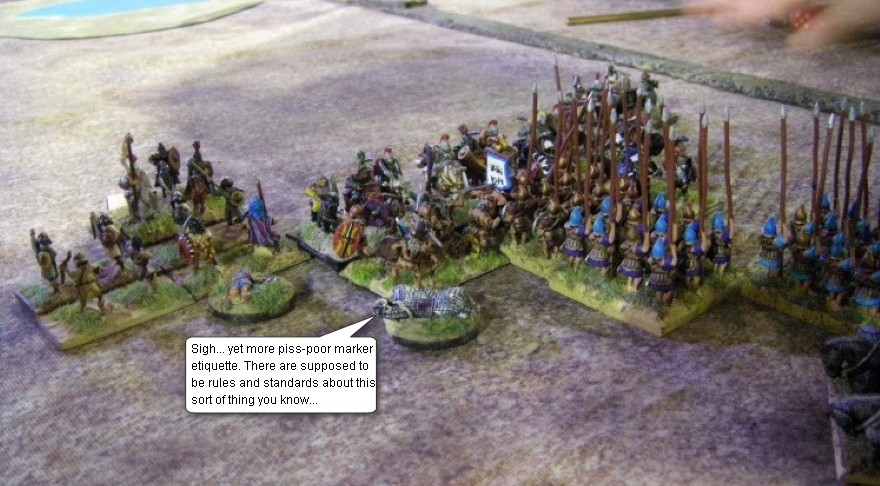 The Galatians were designed to go through and over enemy infantry, but their dense formations gave them at least some resilience to the assaults of the Afro-gothic nobility bearing down on them at some speed.

Marshalling a furious rearguard action, the Successor commander rallied the Galatians and urged them to turn to face the imminent and horse-borne threat from their left. 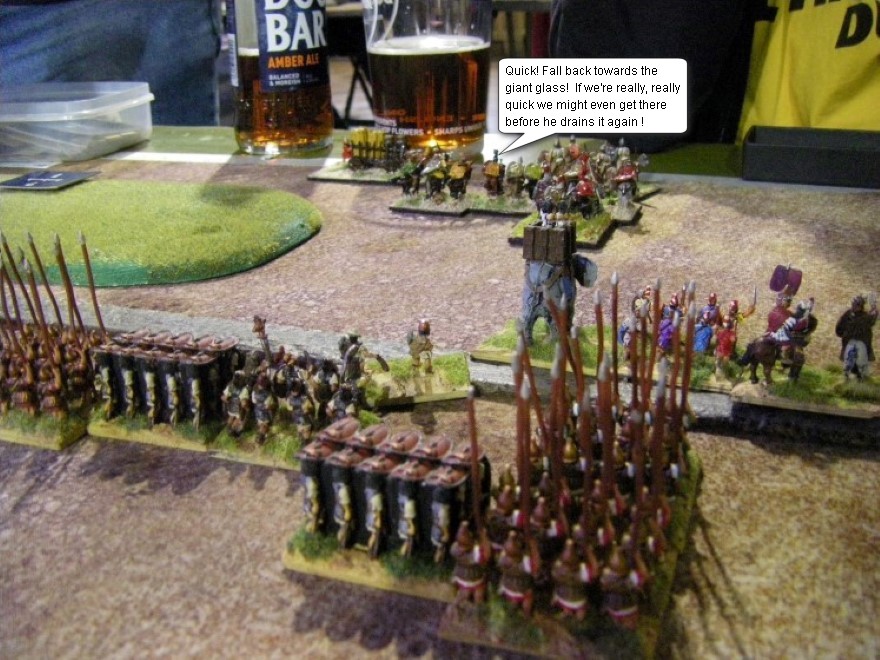 The opposite flank was rather a different story, with a solid and tidy line of Seleucid troops advancing coherently against an opposition who had seemingly little choice but to retreat back towards the Great Doom Bar Bottle monument, at who's glassy feet they had been worshipping regularly all afternoon.

Crossing the near-obligatory transverse road marked another milestone on the Seleucids inexorable advance towards a touchdown on the African Vandal base edge, pinning the enemy cavalry into an ever-smaller corner as they sought refuge from certain defeat.

Whats in each command then?

This is one of the two "infantry" commands in the army, both led by Brilliant Generals and designed to cover a large frontage with decent combat-capable troops. The Elephant, Spearman and 3 LF operate as a formation working together and can go into rough terrain as well - sometimes supported by the Argyaspids, whos loss of cohesion is offset by their Armour and Impact capabilities to some degree. The Camels will hang back and then move out to a (rapidly closing, as the rest of the command drifts to the edge of the table) flank to close the door on any enemy horsemen hoping to sneak past

Between all of the different components this command has a combat-capable frontage (against the right opponents) of an impressive 10 units, or 40cm out of the 150cm wide board

A bowman or two would have been nice, but the camels can shoot so not all is lost on that front anyway. 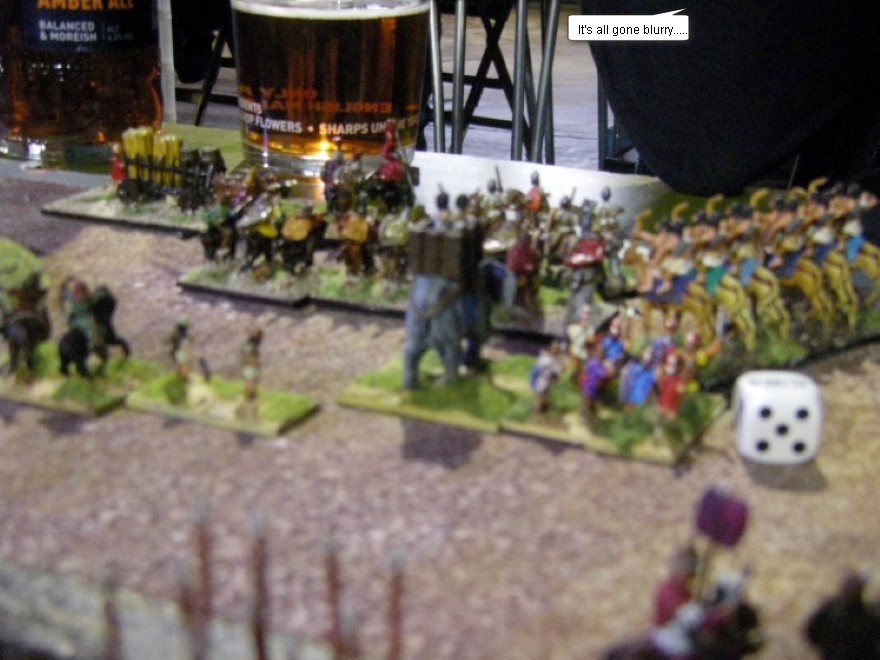 As the fastest moving elements of the Seleucid army swept forward to try and pin the retreating African Vandals in place, things started to get a little blurry - possibly down to the incredible speed across the ground of the long-legged Museum Miniatures camels, perhaps because of the ground-shaking effect of the heavy footfalls of the elephants as they lumbered forward, or, more likely still, the aggregate impact of repeated applications of Doom Bar to the combatants on both sides of the table. 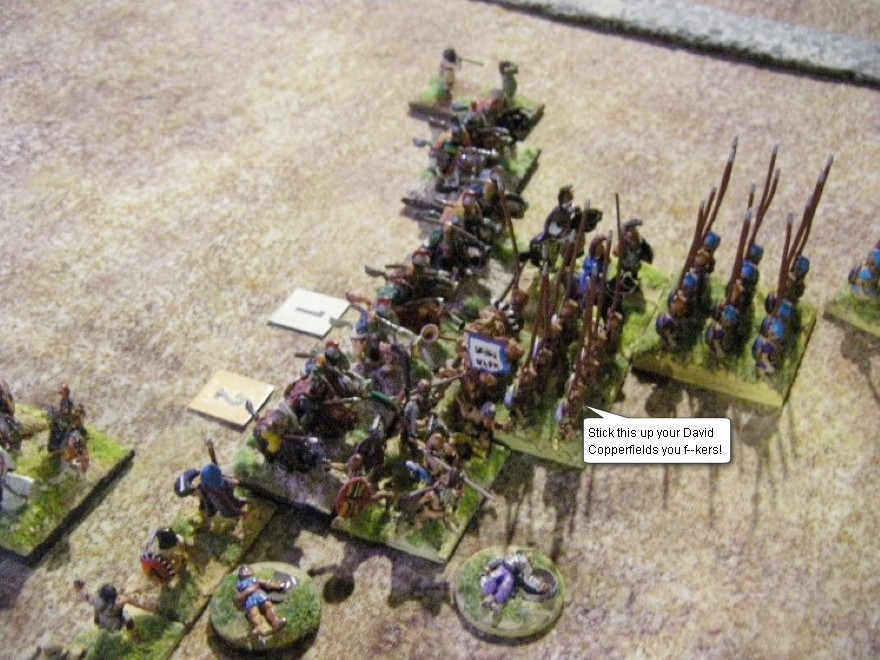 Without the quick breakthrough they craved, the African Vandal Nobility had gotten bogged down in a grinding close quarters stabbing match, and as such their worse factors and lack of cohesion hits was really coming home to roost as their numbers ebbed away

The Seleukids had also taken a decent amount of damage, but they looked well set to command the battlefield when the final reckoning was done. 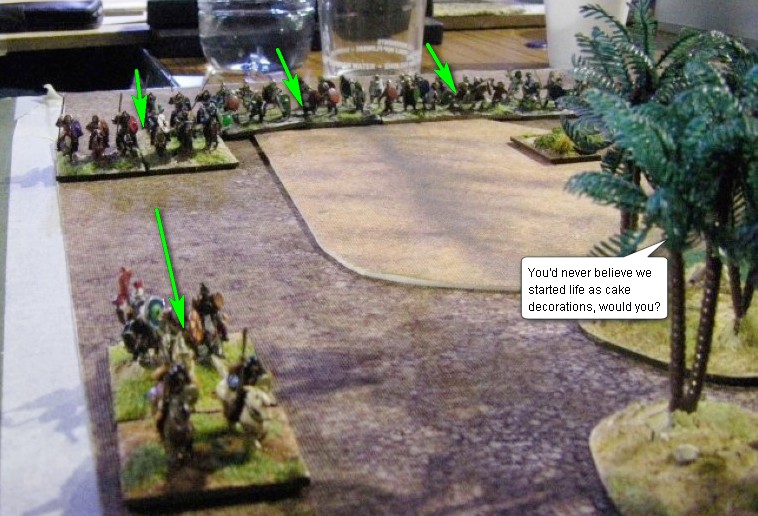 Finally, just a few hundred moments too late and on entirely the wrong flank to have any impact on the game, the African Vandalflank march arrived! 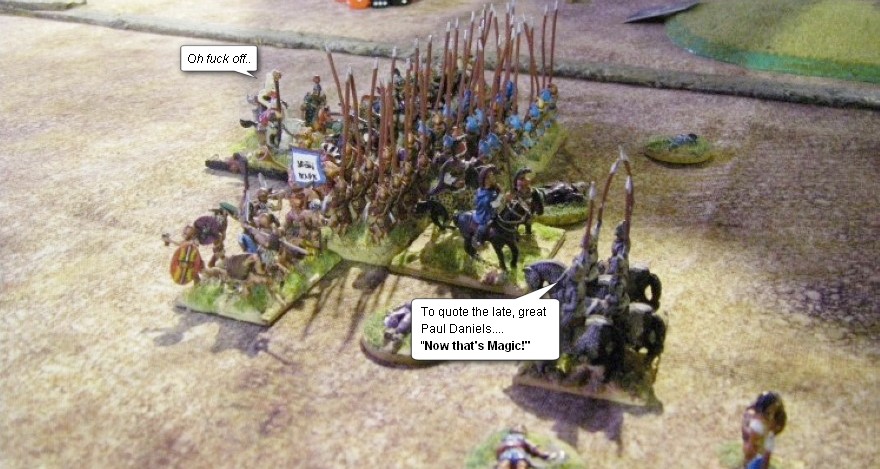 As the outflanking force turned up, the last remnants of the African Vandal right wing finally expired, after failing abjectly to overrun the stoic wall of resistance that was the Successor Phalanx 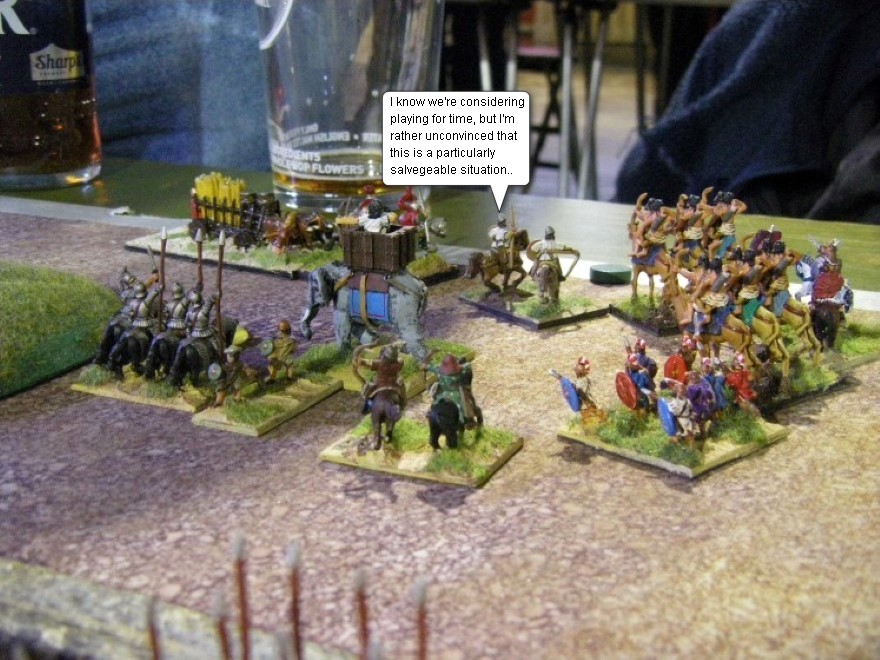 The African Vandals next to their own baggage camp had also now run out of road, and of beer. They expired in a gust of alcoholic belching, never to be seen again

This left the African Vandal baggage entirely at the mercy of the Seleucid forces, who rushed forward eager to collect the empties all the while hoping frantically that a glass bottle deposit scheme existed in 8th century North Africa, the like of which may in this situation make them richer than Croeseus!

The African Vandalic African Vandals expired, barely surviving long enough to see their own flank march arrive impotently. The result is a win for Seleucia!

Click here for the report of the next couple of games in this competition, or read on for the post match summaries from the Generals involved as well as another episode of legendary expert analysis from Hannibal


k to the Match Reports Index and read some more reports?