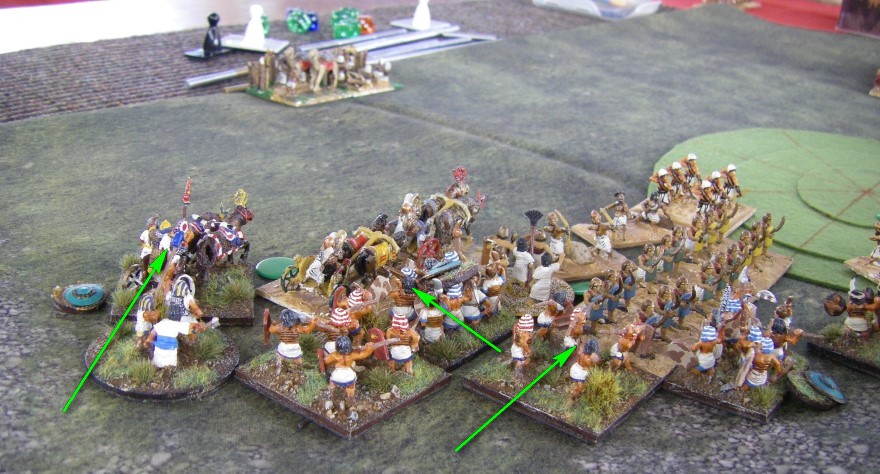 
Fortunately a great round of command and control rolls allowed the Loyalist General to shuffle his units and take advantage of pretty much all of them - smashing into more flanks than the enemy had realised that they actually possessed between themselves in a flurry of turns and charges. 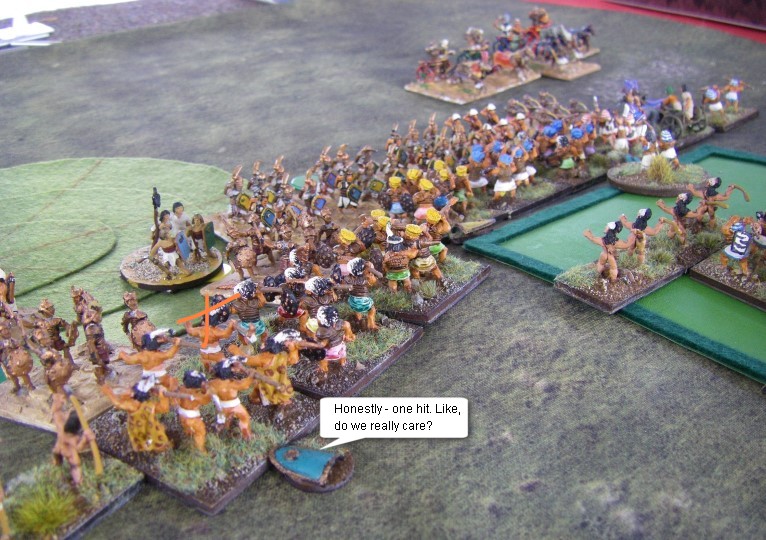 The opposite side was still somewhat of a desperate struggle as neither side managed to engineer the decisive breakthrough that would unzip the enemy line.

That was however until a heroic effort from the central Non-gender-specific Sea Person unit in the very centre of the line saw someone on the opposition being mightily smote - and removed! 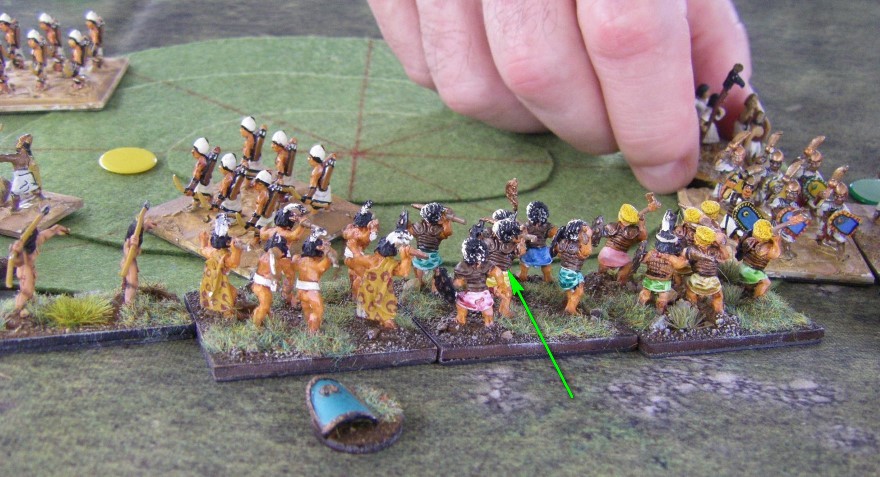 This unlocked a tidal wave of destruction as the rest of the enemy centre collapsed like a deck of Egyptian tarot cards, men, shields and weapons being cast aside in the headline evacuation of what had once been seen as an impregnable uphill position


As the front rank of the enemy line simply ceased to be, poor quality bowmen who had previously been lurking in reserve found themselves almost swept away by the tide of routing friends and then immediately afterwards violently attacked by the jubilant Mishmash warriors of the loyalist army 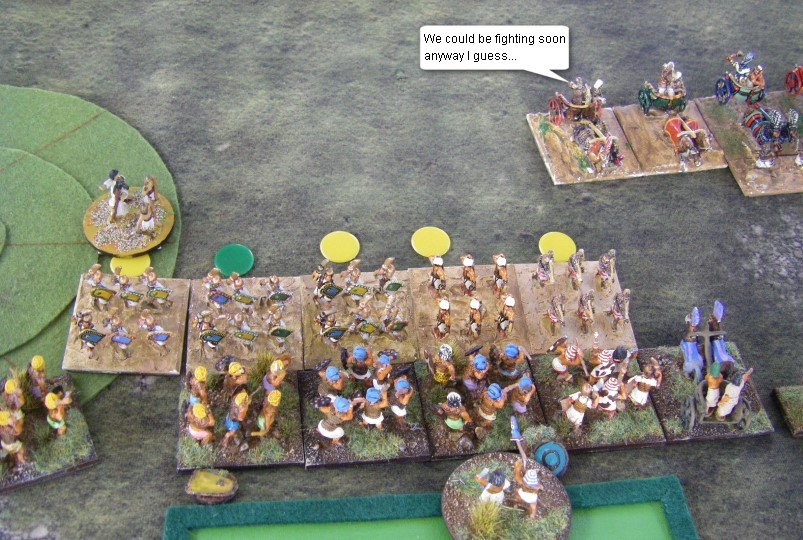 The tide was turning on the right as well, as the steady attrition of close quarters combat started to seriously damage the ability of the enemy Rebel infantry to sustain the fight.


As more and more of them reached the all too dangerous 2-hits status (out of 3) the line looked very, very frail all of a sudden 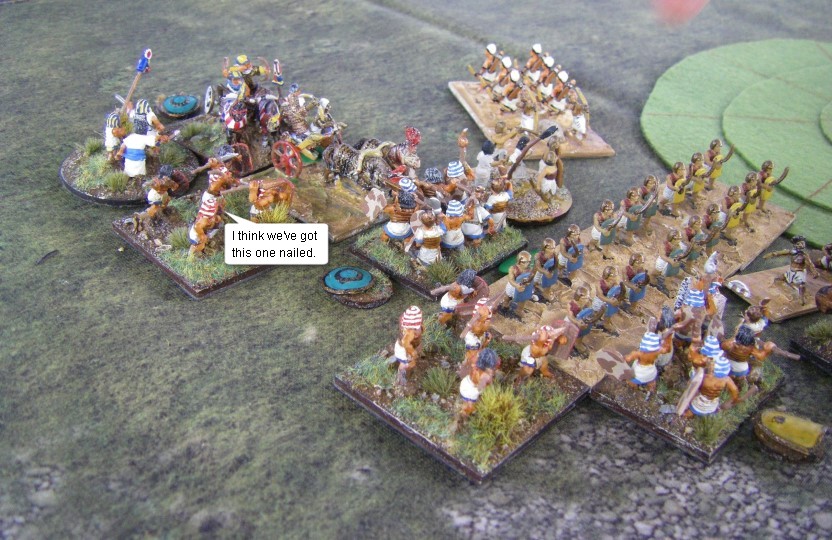 The left wing had by now pretty much wrapped up its work of mopping up the remnants of the enemy right flank.

Nothing seemingly could stand in the way of the multi-vectored attacks of the swirling mob of Loyalist Egyptian chariots and drilled infantry as the enemy went down in a hail of axe and sword blows.

Pursuing up the hill the rest of the enemy second line bowmen suffered about as traumatic an attack as it is possible to suffer from a bunch of loincloth-wearing proto-Lebanese maniacs with bronze swords and giraffe-skin cloaks. 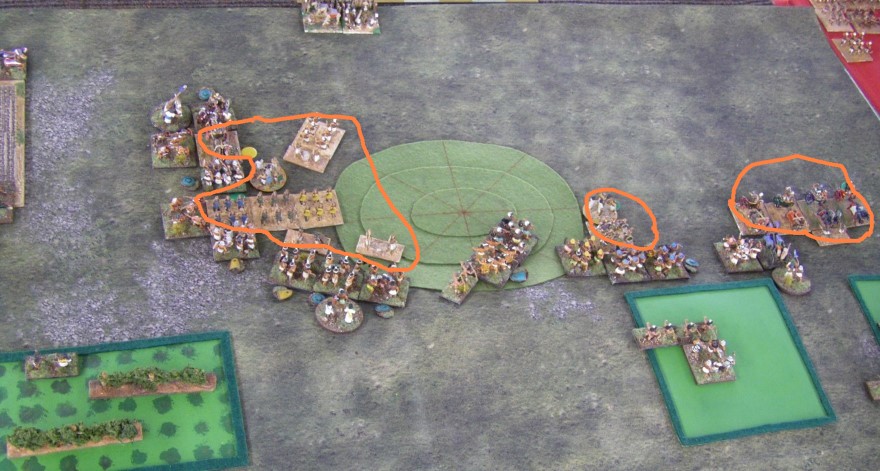 Suddenly a pause for breath - the enemy had been swept from the field and utterly crushed by the power of the Loyalist Alliance!

The only hill in Heliopolis was again recaptured for the glory of the Loyal Empire!

Click here for the report of the next game in this competition, or read on for the post match summaries from the Generals involved, as well as another episode of legendary expert analysis from Hannibal

Hmmmm.. that didn't take long at all. I am clearly the Lion of the Desert, ruler of all Egypt, the King of Kings and bester of all other Kings of Kings (apart from the one from the first round and arguably the one where I had a mutual destruction - although to be fair most of that army was dead before it started so their opportunities to outlive me and claim the Kingship are probably somewhat limited)

But, let's face it, the whole avoiding the hill thing was about as clever as anything I have done all weekend managed to get here, and it did also play a huge part in my army winning the battle so that is certainly something to be very proud of indeed.

With such skills starting to develop against more Egyptians it is a shame that there are no more left for me to play, and that my next game will be against a totally different army

But, given the choices, I am sure that lining up in a big long line and attacking and trusting to the dice and matchups will work like a treat then too

To say this is getting tedious is to do a disservice to the Great Priests of the Temple of Tedium on the Black Sea island of Tedios in the village of Yawn. PLease God of Gods, give us a different opponent in this competition - and I do know that this is inevitable anyyway so bring the damn thing on

Here an opposing army demonstrated the flaws of building too strong a position to attack, and you demonstrated the sort of cowardice that in my armies would have had men hung, drawn and quartered but in Egypt seems to have enabled you to be promoted to God King. God help us!

Those two solid Heavy Foot have proved a bit of a god-send for you too, being tougher and more resilient than any enemy mounted or foot, which sort of makes up for your lack of manly chariots.

I do hope there is only one more game left and so let's find out shall we in the next game?


(These are "affiliate links". If you buy something after clicking on them I get a small kickback from eBay)

(These are "affiliate links". If you buy something after clicking on them I get a small kickback from Amazon)